We are very happy to have been aired on Primocanale thanks to Silvia Isola‘s video report within the episode “Airplanes and drones: the future of flight” of Science and Enterprise, where our Scientific Advisor Gianni Vercelli was present in the studio, and which can be seen entirely in its first and second part. 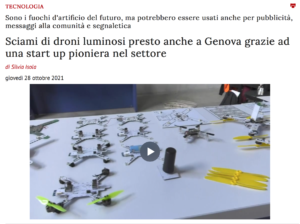 GENOA – A swarm of luminous drones to compose writings and animations in the sky: here are the fireworks of the future, more ecological and with a thousand potentialities. If in China and Japan shows of this type are increasingly frequent, from the start of the Olympics in Tokyo to anniversaries, inaugurations and even messages to the population in major Chinese cities, soon Genoa will be able to make a leap ‘into the future’. The credit goes to a Genoese start-up, LuminousBees, one of the first in Italy to take its first steps in a sector that will be increasingly growing. “Thanks to a call from the municipality of Genoa on Smart Cities for which we were selected, we will make our debut as soon as possible at the Porto Antico,” explains Lorenzo Marcenaro administrative director of the startup and a former student at the University of Genoa.

“We are a Genovese startup that since 2018 has been developing systems to make shows with drones, that is, designing and building swarms of small drones each equipped with Rgb LEDs that allow the drones to be transformed into points of light. The idea is to build the entertainment and advertising of tomorrow, ecological fireworks with more expressive possibilities and also all the technology for the shows within events such as television programs or sports matches. There is great interest in this new expressive possibility, which is certainly more sustainable. Fireworks, in fact, can cause fires, scare and kill animals and release sulfur dioxide, heavy metals and perchlorates into the atmosphere.

“We used the whole underlying part of the drone, integrating high-brightness LEDs and at the same time we worked on all the control and programming software,” says Giorgio Rinolfi, creative director startup Luminous Bees and PhD student at the University of Genoa. “A system on the ground called the Control Ground Station specifically for aerial choreography, takes care of giving all the specific trajectories and missions for each drone and allows a limited group to completely control the execution in total safety, in case of malfunctions. So even if the connection fails at any time and they can completely independently conclude the entire mission.”

To see the attached video and the full article click here.

Our drones on newsstands in the Northwest insert of Il Sole 24H! 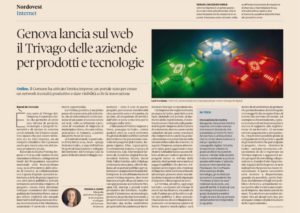 The ArduBee Kickstarter campaign did not reach the expected goal.

The long lead time on the prototypes did not allow us to make the upgrades we had planned, which would have been necessary to bring the campaign to a successful end.

After an initial moment of bewilderment, we realized that launching this crowdfunding campaign allowed us to make ourselves known internationally to drone enthusiasts from all continents, and opened up other possibilities that we are now pursuing.

We finally sold the project.
We can’t reveal details yet, but we hope to bring you tasty news soon.

Soon all the news about ArduBee will be revealed!

ArduBee takes off! The Kickstarter campaign has just started!

It has been some time since we first presented our vision of a fully integrated 3” micro drone and dedicated ecosystem around it at the ArduPilot Conference 2020. From the very beginning, our goal was to create a unified platform that would appeal to research and educational institutions, as well as the maker and DIY scene.
And today, with ArduBee and especially with its ecosystem of add-ons, drones enthusiasts around the world will be able to unleash the potential of the trustworthy and feature-rich Open Source ArduPilot project.

Today the fundraising campaign on Kickstarter is online and from now on you can be part of the ArduBee project and its ecosystem of add-ons!

Pledge to make it possible for everyone to develop autonomous drone applications and to enable research on aerial robotics, swarms powered by a genuine open source flight stack.

Go to the campagne page and choose your favorite “reward” and you will receive our products starting from the end of December. Be sure to not miss our limited packages for early adopters that come with an additional discounted price.

Come on board, let ArduBee take off and help us spread the news about the launch of our Kickstarter campaign! 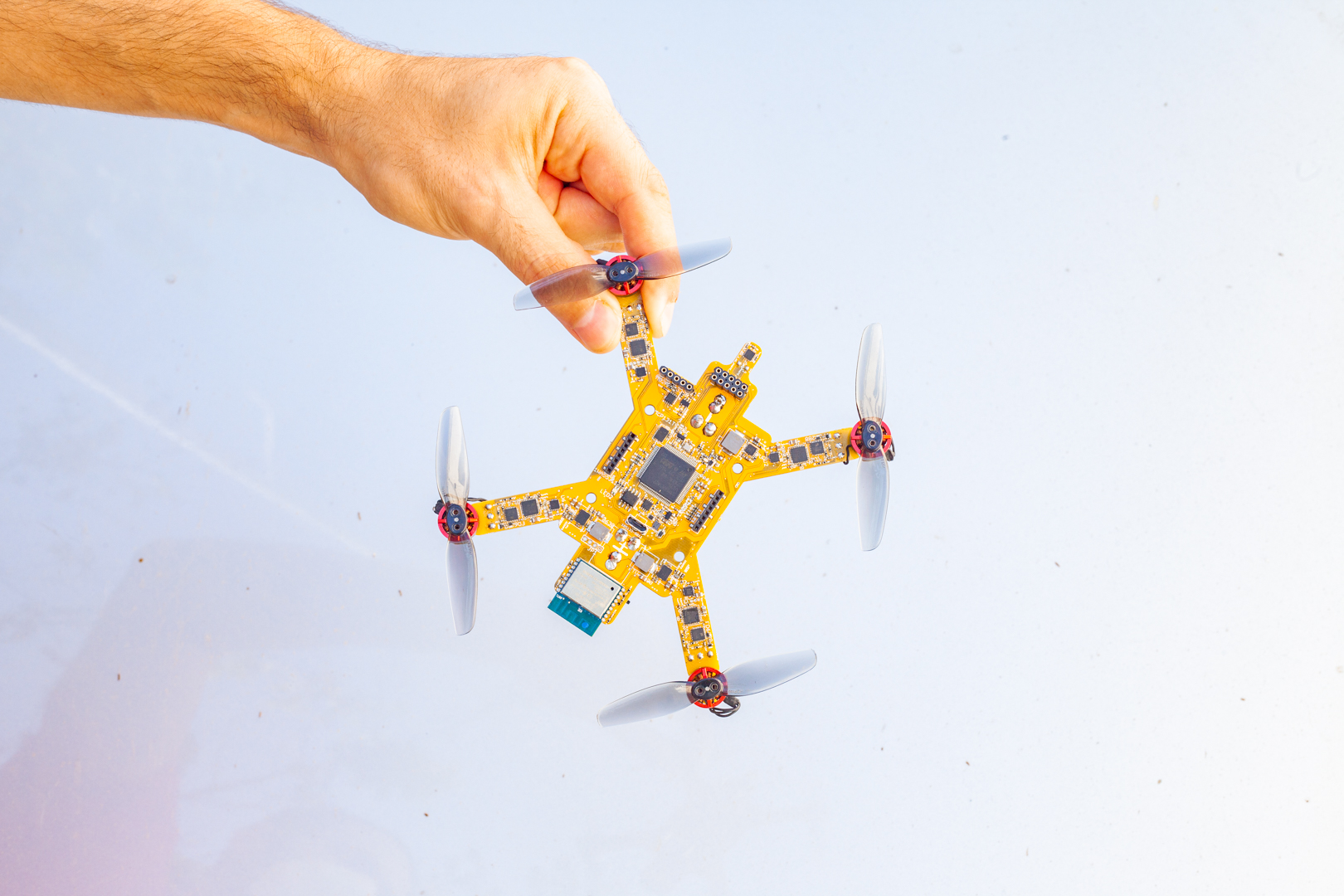 The long-awaited Kikstarter campaign will start on Monday at 12.

Prepare to donate: ArduBee is ready, we need you to take off! Stay tuned.

ArduBee is born! Our speech at the Ardupilot Conference!

On Sunday 29 March, our Creative R&D Director Giorgio Rinolfi presented ArduBee, our new 3 ” micro-drone, at the Ardupilot Conference, an annual reference event for all the developers of the community. Good vision!

We therefore decided to create a post on the Ardupilot forum to inform even more people of the birth of ArduBee, which becomes a point of reference where to write updates and talk to the community.

This Christmas, the magic is in the air! Our last video

Our best wishes together with Agostino Retrò, in a video made by Andrea Nicola Larosa of Lucernafilms.

We are ready for indoor show, and to bring magic to your events.

On December 3, 2019, at the Linz University of Art, the Master Program Interface Cultures invited our Creative R&D Director Giorgio Rinolfi to hold a conference in the context of the INVITED CULTURE READING SERIES:

The development of the services and applications in the shared airspace and the lack of awareness in terms of its potential community use, has started the creation of “Aerial Media Arts”. Ongoing research has in “swarm robotics” the main tool for artistic investigation, performance and dataset visualization for the community.

This lecture will give you an overview on the state of the current UAVs (unmanned aerial vehicles) research. From the traditional aircraft models to the drones and hybrid VTOL system, the autonomous ability has always been required.

Luminousbees is a platform for research and creative applications with swarm of MAV (Micro Air Vehicles). It’s based on the open-source project Ardupilot, the most advanced, full-featured and reliable open source autopilot software available. It is the only autopilot software capable of controlling any vehicle system imaginable, from conventional airplanes, multirotors, and helicopters, to boats and even submarines.

Humans have always been fascinated with natural swarms, remarkable examples of social organisms that rely upon the mutual coexistence of a multitude of simple elements each one assigned with different functions. Swarm Intelligence is a recent scientific area that take inspiration from the behaviors of living beings and aims to transfer the laws that govern the collective behavior to multi-agents’ hardware and software systems or platforms. The application of swarm intelligence to flying robotics allows to provide them with the ability of self-organization based on some input.

Aerial Media Art (AMA) is a novel form of visual language that aims at exploits the air volume surrounding the audience as a 3D performative media space through a swarm of luminous drones. By using the air volume as the stage, the audience is surrounded by and immersed in the performance in a multi-angle fashion, where each participant has his own point of view. This approach is an effective way to drive participants into the human and machine issue in a personalized way.

The first prototype of the new 100 gr drone has arrived!

We are excited about the arrival of the first prototype of our new micro LuminousBees, with three-inch propellers and 100 grams of weight.

More info in the ArduBee page.

By editor
INTERESTED IN A SHOW?
WE ARE READY TO BRING MAGIC FOR  outdoor and INDOOR EVENTS
WITH THE FIRST ITALIAN FLEET OF LUMINOUS DRONES.
SUBSCRIBE, YOU'LL BE THE FIRST TO BE UPDATED!