Living airspace through the interaction between art, science and technology 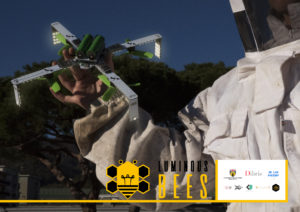 LuminousBees is a nascent startup winner of the StartCup University of Genoa call for tenders and the Innovation Hub special award – Research and Entrepreneurship Foundation. It is composed of an international team of researchers in the field of art, media and design, used as catalysts for social and technological innovation: the computer engineer prof. Gianni Vercelli, Giorgio Rinolfi and Lorenzo Marcenaro, who for seven years have been developing UAV technologies at the Dibris Unige Department, Colorsound, interaction designer, creator of interactive works all over the world, and Ing. Luigi Rinolfi, head of hardware development.

The team presents to the public, the eponymous prototype, the first LuminousBees platform: a swarm of micro drones, which will allow artists of all disciplines to express themselves in airspace through lights, sounds and interactions.

On the same occasion, the group launches the first edition of the Interactive Aerial Media Shows workshop, promoted by the Dibris Unige Department, which will take place at the Savona Campus, and whose results will be presented to the public at the Villa Croce Civic Museum of Contemporary Art (GE) , with the collaboration of Open Your Art. 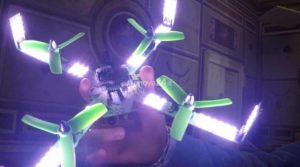 With its project LuminousBees it inaugurates the Aerial Media Arts, a new frontier for the arts in Italy, which will revolutionize the design of shows, concerts, exhibits and gaming: interactive audiovisual choreographic works created in the air space with flocks of UAV technologies, more commonly called drones, or aerial robots.

He launches his project with a public presentation of the team and the prototype, and invites to his Interactive Aerial Media Shows Workshop. “Defining ecosystem relations”, the first in a series of transdisciplinary participatory training and planning events, which will be held from 20 to 22 February 2017 at the Savona Unige Campus: artists, designers and technologists, selected by public tender, they will explore the interactions between humans, robots and nature for a definition of the balance, harmony and beauty of the interactive platform’s behavior.

The speakers of these days will be:

Prototyping, design and programming of swarms of micro drones with IOT technologies and techniques of data analysis & visualization, for the expression of choreographies / languages ​​for aerial performances, based on the study of the biology of the behavior of flocks of the animal world, in particular that of the bees.

The program will lead the participants to the realization of the first public demonstration of LuminousBees at the Civic Museum of Contemporary Art Villa Croce on February 25th 2017. The day will also host a section dedicated to children with an educational workshop curated by Alpamiele and a tasting counter walking with AMI Honey Ambassadors.

INTERESTED IN A SHOW?
WE ARE READY TO BRING MAGIC FOR INDOOR EVENTS
WITH THE FIRST ITALIAN FLEET OF LUMINOUS DRONES.
SUBSCRIBE, YOU'LL BE THE FIRST TO BE UPDATED!